I was fourteen when I found my first job. My mother was friendly with the local chemist, Ruta Strachowska, who was looking for a babysitter for her five-year-old boy, Paul. Mrs. S. was a middle-aged Jewish lady of about my height, with eyes that crinkled up when she laughed, which she did surprisingly often. My mother told me that she had escaped from Poland during the war by swimming across the River Dnieper to Russia at the dead of night, with Nazi soldiers shooting at her as they ordered her to stop. My mother would never have made up anything so incredible, so I believed her, but it was difficult, looking at Mrs. Strachowska’s pixie face and the dumpy figure she had now, to imagine her going for a swim anywhere.

She owned the tiny chemist’s in a row of small shops not far from our house. The bell would ring as you entered, and she’d appear END_OF_DOCUMENT_TOKEN_TO_BE_REPLACED

3 minute read When I was a child in 1950s London, fruit was rationed. It wasn’t government rationing, but anything from abroad was scarce in our household. It was easier to find produce grown in England. And with five daughters, … END_OF_DOCUMENT_TOKEN_TO_BE_REPLACED

A version of this was published in the anthology Tangerine Tango. Hope you enjoy it. GC 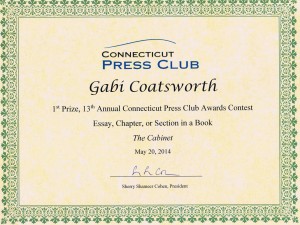 It was time to tackle the garage. I’d been meaning to do it for some time, ever since we’d finished painting the new house, in fact. I found the light switch and blinked as the glare of neon replaced the furtive gloom of the late afternoon. I looked around and wondered where to start.

4 minute read My mother was always looking for ways to save money. Although she had little spare time, with a job and five girls to feed, she decided to bake her own bread. And it would be healthy bread, … END_OF_DOCUMENT_TOKEN_TO_BE_REPLACED

My father was stranded in England after World War II. So he wasn’t an immigrant, exactly – he hadn’t made a plan to leave Poland for better things. I suppose, technically, he was a refugee.

What he had done, before the world went to war, was to leave his homeland in 1938 to work in Toulouse, in south-western France, for a year. He was an agricultural economist, and at 25, had no ties to prevent him from going. He worked for the Ministry of Agriculture, and they assigned him to the Polish consulate in Toulouse, to give him some gravitas. His French is excellent, although the regional accent of that corner of the country can be hard to understand. 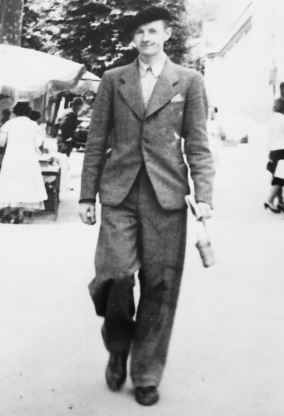 I have a couple of photos of him from that time. Here he comes, strolling along a French street, sporting a beret, hoping to blend in. But the camera in its leather case that swings from his wrist tells the world he’s a tourist. He’s wearing a suit and tie – there’s a gleam on his shoes and a smile on his innocent young face. 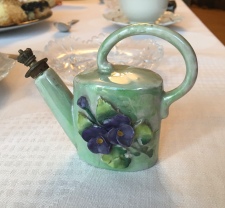 Perhaps he’s on his way to buy that bottle of Violettes de Toulouse perfume, shaped like a tiny watering can, to give to his mother when he returns home. He is there to study local farming methods so he can return to Poland and help his country increase production. Poland has only recently regained its independence from Germany, Austria and Russia, so now the Poles have to make their country work.

You might think he’d wear more casual clothes when working, but no. My father was a bit of a dandy, I suspect. Here he is again, standing in a field outside Toulouse, his right hand shading his eyes while he tries not to squint at the camera. He has his left hand on the hip pocket of his tweed jacket. As my eyes move down the photo, I see his jodhpurs, ending at the top of his pristine leather riding boots. If there was one thing my father always insisted on, it was well-polished footwear.

When not working, he hiked the Pyrenees, and passed the time in cafes and bars with other young people. He visited Lourdes, a shrine not far from Toulouse, not because he needed a miracle then, but because his older brother was a priest, and the gift of a small bottle of Lourdes water could cure all kinds of ills. He managed to hang onto that bottle no matter where he went.

When Hitler marched into Poland, my father joined many of his compatriots who were living and working in France, to form a Polish Army. They fought the Germans side by side with the French, only to find themselves backed up against the English Channel at Dunkerque, praying for a miracle.

They got one. Almost everyone was rescued and delivered to England by a flotilla of small fishing boats, dinghies, and yachts, which volunteered when the troopships couldn’t manage alone.

My father arrived on the south coast, with only the uniform he stood up in, to be put on a train along with his comrades, bound for Blackpool in the north of England. As the train stood hissing and puffing before it began to move, bevvies of women walked up and down the platform handing up thick china cups of milky tea and buns for the new arrivals. My father thanked them in English, and was rewarded with smiles and shouts of “Good luck!”

The Poles ended up in Scotland, and began to prepare for active duty. They knew what they were fighting for – the right to return home to a Poland liberated from the Germans and Russians who were using their country as a battlefield. His brothers showed up in Britain, too. His older brother, an army chaplain, was delighted with is bottle of Lourdes water. Dominic, who was younger, served as a rear gunner in the Royal Air Force.

At the end of the war, anyone who’d served was offered a free (one-way) ticket to Poland, now an officially Communist country. They could stay in Britain, and become miners, foresters or agricultural workers. If they turned that down, they might be offered passage to some part of the British Empire, where they could start again. Their last option was to take the £25 and the suit of clothes they were given on demobilization, and start their own business.

My father had met my English mother by then, and fallen in love. He was faced with a heartrending decision. To travel back to his family – parents, siblings and cousins, whom he hadn’t seen for six years, in the knowledge that the Government would be unlikely to let him leave in the future. Or to stay in Britain until the Communists left. His older brother went back to Poland to tend to his congregation. His younger brother had been shot down over Belgium during the Battle of Britain, and was buried there.

He decided to stay. It wasn’t easy. His homeland now had a new name – the People’s Republic of Poland, and his old consular passport was of no use. After he married my mother, he applied for a British passport, hoping this might let him visit Poland, but the British didn’t want him either.

My father became a stateless person. He had Displaced Persons’ papers, so he was allowed to travel in Western Europe, but he died sixteen years later, without a country, and without seeing his mother again. When I traveled END_OF_DOCUMENT_TOKEN_TO_BE_REPLACED 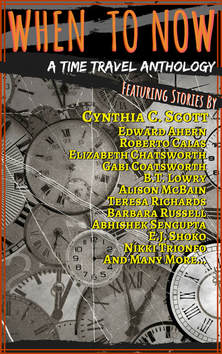 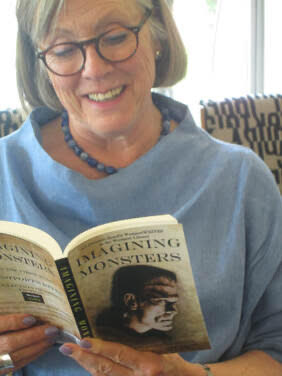